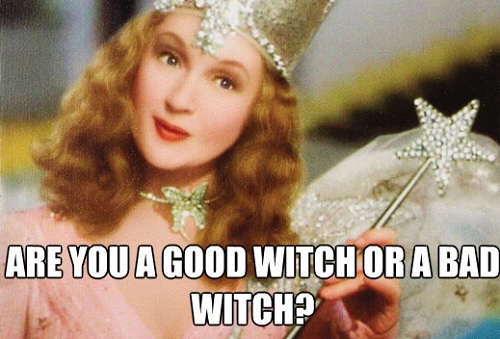 There’s a scene from one of my all-time favourite movies, “The Wizard of Oz” where Dorothy has newly crash landed in/on Munchkin Land and meets the village’s go-to ambassador Glenda “The Good Witch” for the first time,  who asks her the iconic question, “Are you a good witch or a bad witch?”

Like in most Hollywood feature films, we are quite quick to want to determine whether something is good or bad – usually without having tried it out ourselves or having given the person or product enough time to prove or redeem itself. Therefore, in the interest of giving Social Media the benefit of the doubt my response to the question”Is Social Media a good witch or a bad witch?”,  usually culminates with me saying, “It depends.”

At its early stages, in the early millennium, it was anyone’s guess what influence Social Media was going to have on the human race and our ability to communicate, spread ideas and engage. However, 15 years later Social Media has now morphed into a teenager – which is to say we don’t know what to make of it 50% of the time, know it’s very cool (if sometimes awkward) and honestly hope it eventually mutates into a semi decent grown-up.

This week something happened in the Social Media realm that had me all misty-eyed and internally screaming, “Yaaaaaaaaaaaaaaaas, that’s how you do the darn thing!” when it comes to using Social Media.

Exactly one week ago Brandon Stanton, the founder and creator of Humans of New York (HONY), was going about his business which entails photographing NYC residents whilst capturing their touching, honest stories that he posts up on his Instagram & Facebook pages. Last week Brandon posted the story and picture of a young man called Vidal who cited his principle Ms Lopez as his biggest influence as she had chosen to empower the young adults that attend his school to believe believe in themselves, despite the difficulties of their backgrounds and circumstances. Ms Lopez reminded her pupils everyday, that they matter.

I remember reading that post and thinking what an amazing and progressive educator Ms Lopez if this one pupil, Vidal, was a testament to the kind of young people she was influencing and teaching.

That’s when things got exciting.

Listen, if you haven’t followed or heard the story head on over to the HONY Instagram & Facebook pages to find out how Social Media can be a good witch by reigniting, supporting and empowering an entire community…

Nevertheless, when Social Media gets it wrong…it’s one hot mess. How does it go wrong? Let me count the many, many ways:

There’s a reason why I’ve taken a hiatus from what used to be my go-to Social Media channel, “Twitter”. I still believe that it’s a great tool to share and express ideas, create communities and engage in all sorts of riveting discussions all by using a mere 140 characters. However, after 4 years of hanging out there (in my personal capacity) I realised that it had started taking on all the unsettling characteristics I just listed above.

There’s something about anonymity and way too much time that seems to have given some individuals the permission to spew forth their negativity and toxic vibes. That’s when Social Media is “The Bad Witch”.

At this moment in time (30 January 2015), if I had to sort the current popular Social Media platforms into the “good witch or bad witch” categories, based solely on my experience and interactions on them, these would be my ratings:

For this week, positive vibes and fuzzy feelings reign across the Social Media realm thanks to the Human’s of New York Instagram & Facebook accounts. May it last as long as it can…before someone tries to break the Internet with some foolery *sips on some Rooibos tea*

Holla in the comments which Social Media platforms you think are Good Witches & Bad Witches and why!